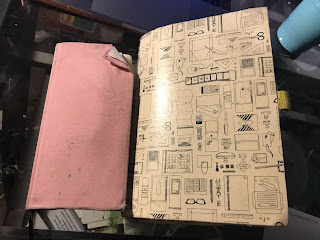 This year marks my second year using the Hobonichi planner. I split my planning into two books - the weeks (strawberry, for work) and the cousin (one book, for personal).

I chose to go without an extra cover for both because I thought I would just go with the flow. Sometime this year I sprung a leak in my bag somehow and both suffered water damage. The weeks bent in the middle and the cover was forever dog eared. 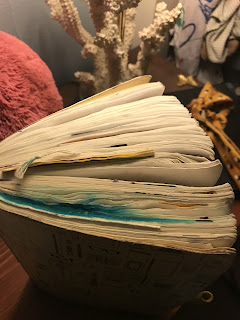 The blue here in the cousin is Organic Studio Walden Pond ink that never dried; everything possible became blue. 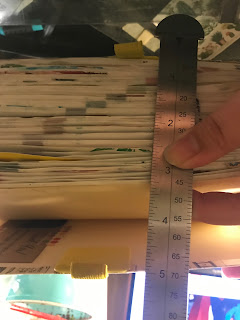 Last year's Hobonichi was gigantic. This year, my cousin was no different. In terms of layout,  my monthly was work schedule related items and bills; the weekly chores; and the dailies I treated like a diary. I love stickers and adding things in so the cousin in the end spanned about 3 inches without the cardboard cover included. If I don't press down it reaches 5 inches. And this thing ended up being heavy. I had to stop carrying it daily sometime in October because it was making my purse feel like twenty pounds. Because of that, I feel a bit spacey in terms of time as I lost track of it. I did my best to catch up when I got home but my last written in date was 12/22 and I missed a few weeks over the course of the year. 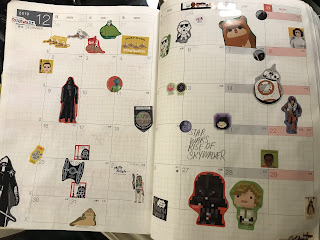 Here's my December 2019 layout pre schedule! I was very excited about my Star Wars stickers. 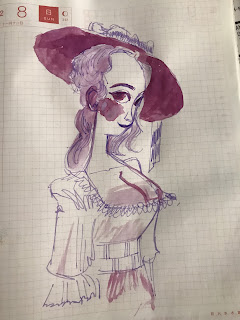 And of course when I had nothing to write about I tried to sketch. I think the Hobonichi makes for an extremely expensive sketchbook; but the results of this inkwash is fabulous, and the charm of the paper is undeniable. I try not to be too precious about the paper even though I value it so much because the Hobonichi planner is meant to used, and in that way, loved. And if you don't make an entry on that date you 'lose' that page so it might as well get used in some capacity!

As for the Hobonichi weeks... it did not work out for me. The size was great but I did not use it that much and had at some point lost it for a week or two. It became an expensive to do list and I couldn't justify both the cousin and the weeks for the amount of work I do in reality. I am glad I tried it as it made me realize it was good to have a running tab of what needed to be done and when but I don't think it necessarily needed the weeks format.

For 2020 I am just switching to a mini bujo / commonplace journal in Field Notes for work (in a TN Passport) and for my personal life, a Cousin Avec in my Galen A5 cover, which starts this week (!!!) The other thing I am going to try to integrate is a project planner where the month at a glance is, and if I get that going then I will post a picture. I am very excited about Year 3! 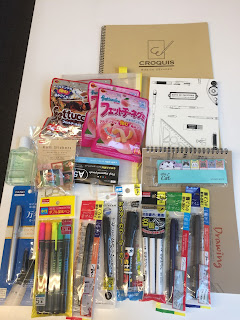 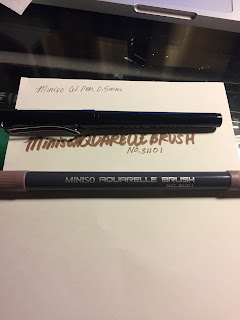 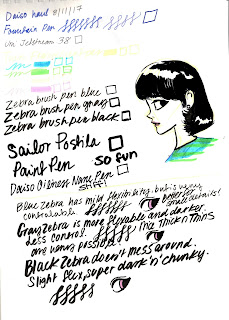